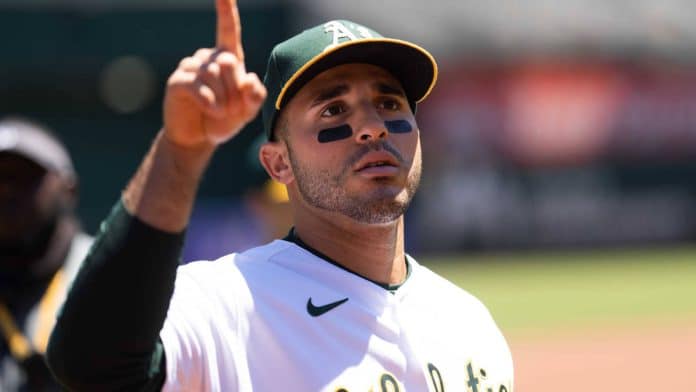 The Brewers are known to be in the market for outfield help — specifically in center field — and they’ve had recent talks with the Athletics about a potential trade involving Oakland outfielder Ramon Laureano, Jon Heyman of the New York Post writes.

The 28-year-old Laureano is just one of several Athletics players who could change hands in the coming days. He missed the first month-plus of the season while finishing out an 80-game PED ban and has turned in a .224/.305/.396 batting line with 10 homers, 14 doubles and nine stolen bases in 285 plate appearances since returning.

Those numbers certainly don’t stand out as overly impressive, but when factoring in Laureano’s cavernous home park, wRC+ pegs his overall offensive output at about five percent above that of a league-average hitter. Laureano has been average or better each season of his career, by measure of wRC+, and carries a lifetime .256/.330/.452 batting line in 1542 trips to the plate.

Cristian Pache’s presence on the A’s roster — at least, prior to his demotion to Triple-A — pushed Laureano from center field to right field upon his return from the restricted list. He’s drawn quality marks for his glovework in right (+4 Defensive Runs Saved, 2.7 Ultimate Zone Rating) but curiously posted dismal numbers through 169 innings in center this season (-7 Defensive Runs Saved, -3 UZR, -3 Outs Above Average).

Laureano has a solid overall track record in center, however, and the Brewers are understandably on the hunt for options there after parting ways with Lorenzo Cain earlier this season. Twenty-eight-year-old Tyrone Taylor has stepped up as a frequent option in center, but his bat has wilted after a hot showing in May. Since June 1, Taylor is hitting just .198/.234/.358 with a 29.7% strikeout rate. Jonathan Davis has also seen time in center, providing good defense and also drawing some walks out of the nine-spot in the order, but he also has just one extra-base hit (a double) in 75 plate appearances.

Circling back to Laureano’s PED suspension, while it understandably will lead to some skepticism regarding Laureano’s prior performance, it should also be noted that the suspension effectively extended the Athletics’ club control over the outfielder. Laureano did not receive pay or service time while on the restricted list and entered the season with three years, 14 days of MLB service time. As such, he needed 158 days of service to reach four years and remain on track for free agency following the 2024 season. By the time Laureano was reinstated from that suspension, however, only 151 days of the current season remained.

As such, Laureano should be controllable for three more years beyond the current season, as opposed to the previously scheduled two. He’ll be eligible for arbitration raises in each of the three coming campaigns, building upon this year’s modest $2M salary. That’s plenty affordable for any team but may hold particular appeal to a Brewers club with a massive arbitration class (headlined by Josh Hader, Brandon Woodruff, Corbin Burnes and Willy Adames).

The extended club control, however, also lessens the Athletics’ urgency to sell Laureano at all — particularly at a time when his offensive production is down a tick from prior seasons. If teams aren’t willing to put forth a compelling offer, the A’s can just hang onto Laureano into the offseason and revisit talks then, when he’d still have three full seasons of club control remaining.

In addition to the Brewers, the Marlins are also known to have interest in Laureano, and the Phillies, too, have been in search of center field upgrades.