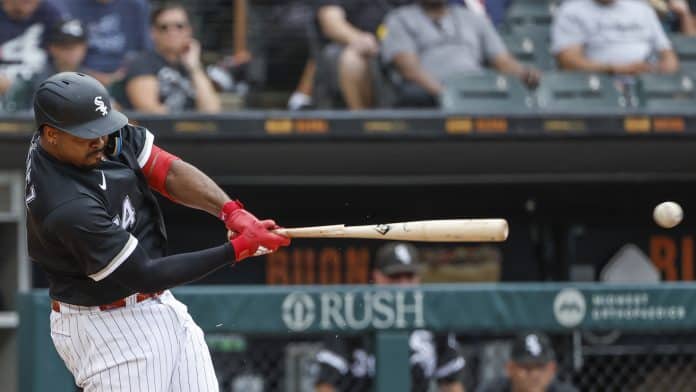 Today’s SGP is pretty low-risk simply because it includes teams trending in opposite directions. Sometimes it’s hard to find good value for a game that has one team playing well, and the other playing badly, but that’s not the case in Thursday’s series opener between the Chicago White Sox and the Texas Rangers. Despite Chicago having won seven of its last 10 games and Texas getting swept at home vs. Baltimore, the White Sox aren’t favored that heavily on the moneyline (-130 DK).

But today’s SGP doesn’t include Chicago on the moneyline. Instead, it features three legs with alternative spreads. Best of all, it still comes out to over +100, which means you win more than double your money.

The White Sox may have been the biggest disappointment in the first half, but they finally might have turned the corner. Chicago has won or earned a series split in four straight series, and trail the Twins by just two games for first in the American League Central. One reason why, Eloy Jimenez.

Jimenez has been limited to just 30 games due to injury, but he’s finally healthy and has been the guy in the middle of the order that they expected him to be. Jimenez went 3-for-4 on Wednesday vs. Kansas City and has now hit safely in nine straight games. Jimenez isn’t exactly someone who walks a lot — just five walks in over 100 at-bats this season — so, if he’s going to get on base, it’s likely to be via a hit. Texas starter Cole Ragans is making his MLB debut, which makes Jimenez’s chances of recording a hit even higher.

See also  Which active MLB players are most likely to make the Hall of Fame?

Yes, the White Sox still have the fifth fewest home runs in baseball, but this team that was projected to run away with the AL Central, is finally starting to hit and score runs consistently. Chicago knocked out 12 hits on Wednesday, scored nine runs on Tuesday and activated outfielder Luis Robert off the injured list earlier this week. There’s a reason the sportsbooks still have Chicago as the favorite to win the AL Central despite trailing Minnesota and Cleveland. The White Sox have a ton of talent; the question is can they finally put it all together? Only time will tell.

Chicago probably wins on Thursday, but just to be safe, take the White Sox +1.5 on the runline. Texas is 2-1 vs. the White Sox this season, but they played each other in over a month. Some rookies flourish in their MLB debut, but that’s rare. And Texas isn’t exactly a pitcher friendly ballpark. Ragans is a former first-round pick who has pitched well in Triple-A — 3-2 with an ERA just north of three in eight starts — but as you already know, the big leagues are far different from the minors.

Which leaves us to our final leg — Chicago over 2.5 runs. The way the White Sox have been swinging the bats, this might hit before the fifth inning. And the Rangers are far from a dominant pitching club. Texas allowed at least six runs in each game vs. Baltimore, and are in the bottom third of the league in overall ERA. And July wasn’t exactly a good month for the Texas pitching staff — third-worst ERA in the AL — making this leg even more likely to hit.

SGP’s can be hard to hit, especially late in the season, but this one is worth betting. And remember, $100 wins you $110.